Special Operation, January 25: The White House confirms that tanks have been sent to Ukraine

Moscow, January 25 – The White House has confirmed that 31 M1 Abrams tanks have been shipped to Kyiv, and their delivery will take several months; Russian President Vladimir Putin said that the Ukrainian army does not take into account anything, they created detachments and shot their own people in the back; Kyiv is preparing a counterattack in the Zaporozhye direction, since in the area of ​​\u200b\u200bthe city of Zaporozhye, an accumulation of enemy forces has been recorded – up to 40 thousand people, said the acting governor of the Zaporozhye region Yevin Paletsky.

On Wednesday evening, an official in the US administration told the Qatari Al-Jazeera TV channel that US President Joe Biden will announce a decision to provide Ukraine with Abrams tanks on Wednesday.
Related Posts

In the United States reacted sharply to Kyiv after the…

Zelensky announced a difficult situation for the Armed…

Russia’s ambassador to the United States, Anatoly Antonov, said that supplying American tanks to Ukraine would be a “blatant provocation”, and warned that the Russian army would be hit by the armored vehicles.
The Washington Post, citing US officials, reported that Abrams tanks, which may be announced to be being sent in the United States to Ukraine, will likely not arrive in Ukraine any time soon. The official told the publication that the Abrams tanks, in the event of a possible decision to supply them to Kyiv, will not be “for combat in the near future,” and most likely they will not be delivered to Ukraine for several months or even years. 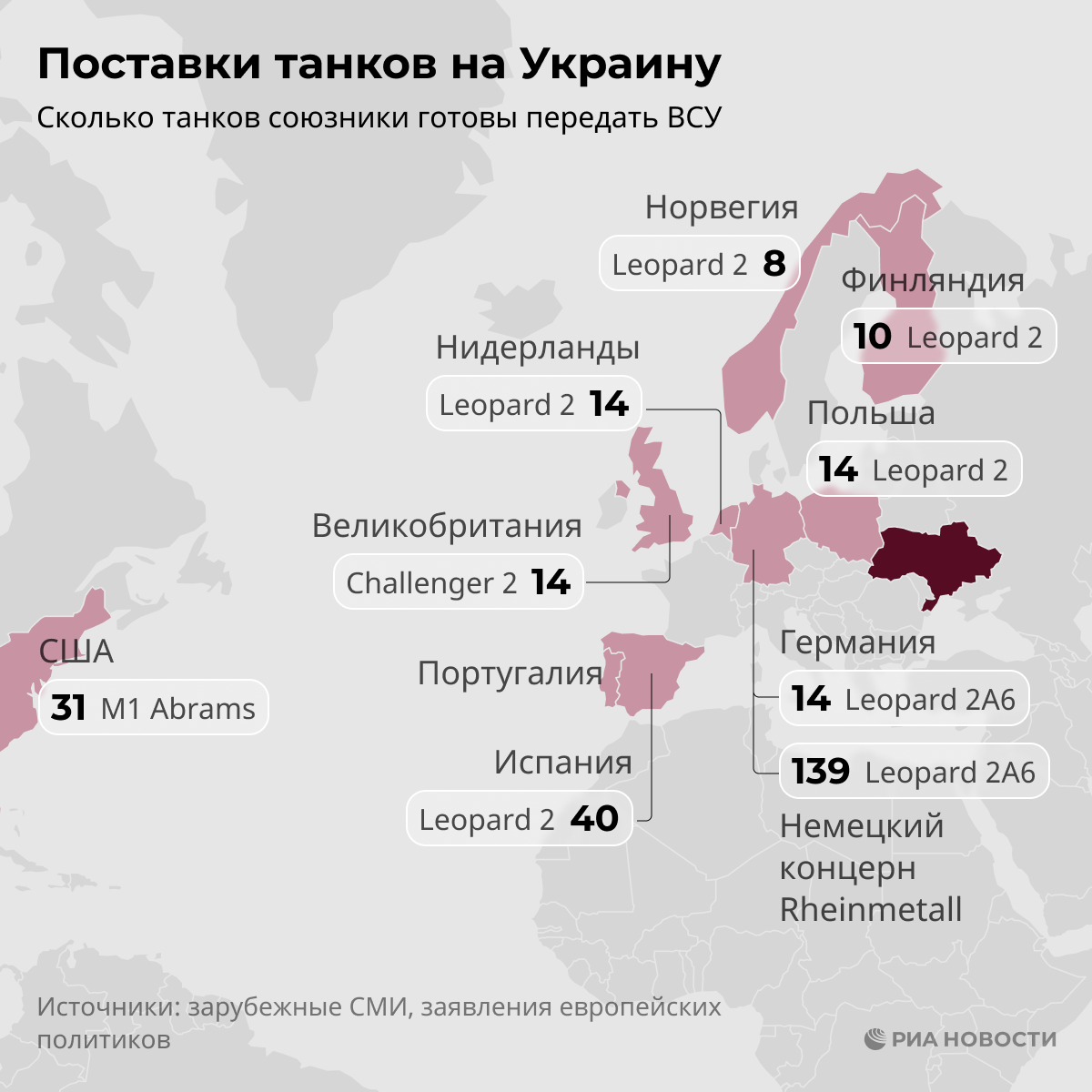 Graphs
German cabinet spokesman Steffen Heppistreit told reporters that the German government had decided to supply Ukraine with Leopard 2 tanks. He also stated that Germany aimed to form two tank battalions for the Ukrainian side and, as a first step, would transfer 14 Leopard 2 tanks to Ukraine from Bundeswehr stocks. German Defense Minister Boris Pistorius told reporters that Germany would supply Leopard 2 tanks to Kyiv no earlier than in 3-4 months.
The Russian Embassy in Germany called Berlin’s decision to supply Leopard 2 tanks to Kyiv as very dangerous: it takes the conflict to a new level of confrontation.
German Chancellor Olaf Scholz said on Wednesday, in response to questions from Bundestag deputies, that Germany will not supply combat aircraft to Ukraine and send its own soldiers, “neither now nor in the future.”
Belgian Defense Minister Ludivine Dedondre said that Belgium had no serviceable tanks to supply to Ukraine, and that equipment had been withdrawn from service many years ago.
French Defense Minister Sebastien Licorne said on France 5 TV on Wednesday that the first AMX10-RC wheeled tanks that France will send to Ukraine will be delivered in February.
A senior US administration official confirmed that the US has sent 31 M1 Abrams tanks to Ukraine. He added that the delivery of M1 Abrams tanks to Ukraine will take months, and the United States also hopes that supplying weapons to Ukraine will not only help Kyiv in defense, but also allow it to seize lost territories, including Crimea.
In addition, according to a senior US administration official, the US will also send eight M88 armored recovery vehicles to Ukraine to service the M1 Abrams tanks. As the White House also said, the United States has begun work on a program to train Ukrainians to use Abrams tanks.
The Pentagon said in a statement that the total volume of the new package of US military aid to Ukraine with Abrams tanks will amount to $400 million.
Norwegian Defense Minister Bjorn Arild Gramm said his country is ready to send tanks to Ukraine, without specifying the number, NRK radio reported.

Russian President Vladimir Putin said that the Ukrainian army does not take into account anything, it created detachments and shot their own people in the back. He also stated that the purpose of the special military operation is to protect the people and Russia itself from the threats they are trying to create in the neighboring historical Russian lands.
On Wednesday, the Russian Defense Ministry said that the Russian army had stopped an attempt by Ukrainian sabotage and reconnaissance groups to land on the left bank of the Dnieper River in the Kherson region.
Wagner units are advancing in Artemovsk (aka Bakhmut), and fighting is taking place both in suburbs and neighborhoods recently captured by the enemy, Denis Pushlin, DRC’s acting president, said on Wednesday. He also said that the liberation of Solidar allowed Russian forces to take control of the areas from which Kyiv launched strikes, as well as to block the supply routes of Ukrainian forces. He also stated that Kyiv continues to transfer reserves to the area of ​​the settlement of Marinka in order to keep them and avoid the encirclement of Avdiivka.
The press secretary of the President of the Russian Federation, Dmitry Peskov, said that there are no prospects for entering the diplomatic track to resolve the Ukrainian crisis now.
Ukrainian troops are preparing a counterattack in the Zaporozhye direction, and an accumulation of enemy forces has been recorded in the area of ​​​​the city of Zaporozhye – up to 40 thousand people, said the acting governor of the Zaporozhye region, Yevgen Paletsky.

– the Russian security forces stopped the financing channel for the SBU operatives involved in organizing terrorist attacks in the Kherson region; Money was transferred from Western countries through banks to the European Union, including the Baltic states, Poland and the Czech Republic, a representative of Russian law enforcement agencies in the region told the News Agency.

Russian leader Dmitry Peskov’s press secretary told the News Agency that Russian President Vladimir Putin has not communicated with Vladimir Zelensky over the past few years. Putin and Zelensky met in 2019 at the Normandy coordination summit in Paris. At the same time, Putin also held bilateral meetings – with Zelensky, French leader Emmanuel Macron, and Angela Merkel, who held the post of German chancellor.
Washington has unequivocally declared its desire to inflict a strategic defeat on Moscow, and it is impossible not to notice the reality, as the News Agency was told in the Russian Foreign Ministry. Commenting on the words of Dmitry Polyansky, First Deputy Permanent Representative of the Russian Federation to the UN, that the West has not crossed “all red lines yet,” the Ministry of Foreign Affairs noted that “a mixed war is being waged against our country, which (Russian Foreign Minister) Sergey Lavrov spoke in detail recently “.
NATO Secretary General Jens Stoltenberg said that NATO is not and will not be a party to the conflict in Ukraine, and is not sending troops or aircraft there. He also said that the path to peace in Ukraine lies through the supply of weapons to Kyiv.
Former Japanese Prime Minister Yoshiro Mori said Russia’s failure in the Ukraine conflict was “practically unimaginable” and questioned the wisdom of “investing so many forces in Ukraine”.
In the event of a military conflict in Europe, the forces of the professional army alone will not suffice, the whole of society will have to join it, and a “partial mobilization of people and equipment” will be carried out, Chief of the General Staff and Major General Karel Rzejka of the Czech Army said Wednesday in an interview with CTK news agency.
The organization said on Wednesday that the historic center of Odessa is recognized by UNESCO as an endangered historical heritage object. The Permanent Mission of the Russian Federation to the organization said that the decision to include the historic center of Odessa in the UNESCO World Heritage List under threat of procedural rules was bypassed under pressure from the West. In addition, as stated in the Permanent Mission, Kyiv hid from UNESCO the facts about the demolition of art monuments in Odessa and put pressure on the organization’s independent experts.
US President Joe Biden said in a televised address Wednesday that Ukrainian forces are preparing a counterattack. He also said that the West’s actions to help Ukraine did not pose a threat to Russia.
0
Share

The Dutch hacker gained access to the personal data of all Austrians: the police

Raiffeisenbank: Raiffeisen Leasing Russland has no assets in Ukraine